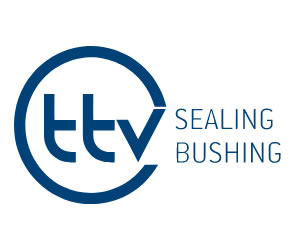 The ttv-2Y sliding bushings are lead-free and constitute an improvement on the ttv-2X bushings. They are used in sectors where lead must not be used, such as in textile machinery and vehicle steering systems, medium-speed applications or applications with medium loads and medium levels of grease lubrication.

With immediate effect, we offer the developed sliding bushing material ttv-3Y (TX) as an improvement of our well-known POM material. A special nylon layer, sintered on a steel or bronze band is characterized by the following advantages towards the characteristics of the POM material:
wear-resistant, heat-resistant (no problem to use until max. 160 C°), extended lifetime.

The ttv-2X sliding bushings are based on a 3-layer composite: The composite comprises a steel substrate, a sintered bronze intermediate layer and a modified POM surface sliding layer.

These bushings are particularly suited to applications with low speeds and heavy loads. The ttv-2X sliding bushings are generally used in the automotive chassis sector, in forging, metallurgical and mining machinery and in power plants and rolling mills, among other areas.

The ttv-2S sliding bearings can be used with very little or even no lubricant under mixed friction, and are characterised by their low levels of friction, good corrosion protection and long service lives. These sliding bushings can be used with oscillating movements under severe environmental impacts, such as corrosion. The applications for these bushings are winches and bulldozers but also printing and dyeing machinery in the textile industry. Whether agricultural machinery, construction machinery, forestry technology, drive technology, mechanical engineering, automotive or aerospace, we are ready for your challenges. With our engineering solutions, we manage to offer added value in all decisive product parameters through solutions developed specifically for customers and applications. Get to know our competence and best examples in the most diverse markets.